Brief History of the Church 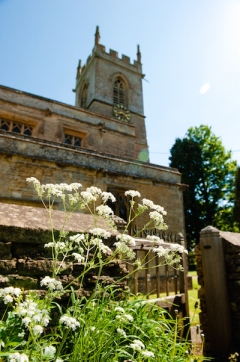 The Eynsham Abbey Rolls for 1197 include a reference to the Chapel of Chadlington.  However, the round arch incorporated in the north wall of the nave is Saxon and may be from an earlier church on the same site. It is likely that the nave and both aisles were built in c.1190, towards the end of the Transitional Period of architecture, between the Norman and Early English styles. The north transept and chancel were later additions, although the Eynsham Abbey Rolls refer to the chancel being re-roofed in 1354, suggesting that it was of a respectable age by then. The tower, which is unusual as its east wall intrudes into the nave, was rebuilt in the 15th century, when the nave roof was raised and the clerestory added.

Much restoration and new work was carried out in the 1870s when the chancel was rebuilt. At the same time the clergy vestry and the organ chamber were built as an eastward extension of the south aisle, over a ‘crypt’ housing a coal-fired boiler. Interestingly, the church had no water supply and the early heating system was supplied from a header tank in the clock chamber filled from buckets carried up the spiral staircase!

Post-Victorian alterations and additions included electric lighting in 1931, a wood and glass screen in the tower vestry arch and a vicar’s stall, all in the 1960s. The original hot water heating system, with a new oil-fired boiler, was destroyed by frost at about this time, removed and replaced by suspended infra-red electric heaters.

Externally there is much of interest, including the carved rainwater spouts, especially the central one on the south wall and the unusual ‘green man’ on the east end of the north wall of the nave. The two carved heads outside the east window of the chancel represent Church and State – Queen Victoria and, probably, Dr Samuel Wilberforce, Bishop of Oxford at the time.

Much work has been undertaken this century.  From August 2007 the church was closed for eight months for reordering. This involved rewiring throughout with new lighting, heating and sound systems, a new stone floor in the nave, a disabled toilet in the tower vestry with a new mezzanine floor above, the replacement of the fluted glass in the tower arch with clear glass, creating new vistas, the provision of a servery at the west end of the south aisle, and the installation of wood and glass screens to enclose the north transept as a separate space for community use.  Mains water and gas were brought into the church and the crypt refurbished for the new boiler.

Finally, the building was internally redecorated. More than half the original pews have been replaced with folding chairs to provide flexibility for both services and events. The kneelers in the church were all made by parishioners to mark the millennium.

1. 14th Century bell tower built in the Decorated Gothic style.  The tower sits forward of the nave which is unusual.  The marks to be seen on the tower inside the church show where the high-pitched roof fitted against the tower before the clerestory was added in the 15th century.  The tower was rebuilt in the 15th century when the nave roof was raised to accommodate the new clerestory.

2. The church has a ring of 6 bells, which date from 1714 to 1841. In 2006, five of the six bells were refurbished by Whites of Appleton while the treble bell, thanks to the generosity of parishioner Faith King, was recast at Whitechapel Bell Foundry. This bell bears an inscription in her memory.  The clock face on the tower was restored in 1995 and in 1999 when a radio-regulated clock mechanism was fitted and the opportunity taken to restore the half-hourly strike, removed during alterations to the original clock some years earlier.

4. The nave and the north and south aisles were built c.1190 with four bay arcades linking the aisles with the nave. It is possible that there is a range of different styles in the nave and both aisles because work was given to different masons to carry out.  There are 15th century piscinae in the north and the south aisles. These were stone receptacles which held water to wash the chalice.

5. The north door would originally have been the main door of the church.

7. The rounded arch of the windows and the door on the south aisle are in the Transitional style.

8. The stone arch marks the location of a blocked head of a Norman window.

9. The hole adjoining the chancel arch above the pulpit is a ‘squint’ which allowed a Gospel reader standing on the top of the former rood screen to see the priest at the altar. At one period in the Middle Ages it was the practice at some festivals for a reader to stand on the screen and read part of the Gospel from there. The reader would need to see the priest at the altar so as to begin his reading at the right time

10. The north transept was added in the late 14th century

11. The chancel was rebuilt in the 1870s, probably in the same Decorated style as the original chancel. The work was carried out by St John’s College Oxford who, as lay rectors, were responsible for the chancel. The stained glass windows date from this period and depict scenes from the nativity. The communion table dates from the 17th century. The wall monuments would have been in the original chancel. They are in memory of Joseph Rollinson (d. 1699) and the marble wall monument is in memory of Sir William and Lady Catherine Osbaldeston, who died in 1740 and 1737 respectively. 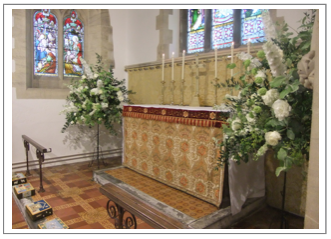 12. The vestry has a 3-light window with Perpendicular tracery and a square-headed window facing south. The door from the vestry into the chancel has been squared off to enable the clergy to pass through without knocking their headwear off!

13. The crypt was refurbished in 2007 and a new boiler installed.

14. Outside the church, there are many table-top graves, twelve of which are Grade II listed.

15. On the east end of the north wall of the nave a ‘green man’. The concept of the carved green men, which appear in many churches around the country, is based in pre-Christian fertility rites. The Chadlington green man is unusual because normally trees grow down from the face to form a beard, but here the trunk forms the nose and the branches are the eyebrows. Even more unusual is the similar carved head in the same position on the south wall, although Tim Healey, an expert on the subject, does not consider this a true ‘green man’.

We hope that this guide has given you an insight into our beautiful church, which has given comfort to so many over the centuries. We hope also that it might have inspired you to come and visit it for yourself and perhaps to enjoy a service or one or more of the many concerts and social events which take place here. Details of services can be found at the top of the righthand side of our website and concerts are listed on our forthcoming events page here.

The cost of maintenance of the church is considerable and we hope that you will feel able to give generously so that this fine building can remain a witness to the presence of Jesus Christ to future generations. Donations may be left in the wall safe by the door.

This guide was compiled by Lois Partridge and David Morton, February 2013.

Mark is currently on sick leave. Ilona is covering for Mark during this period. Her normal rest day is Monday.