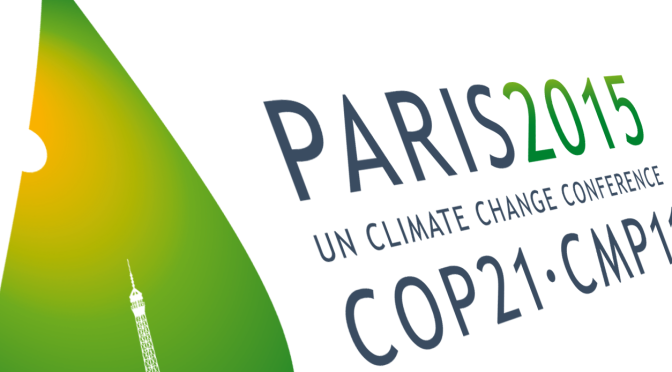 As the Paris climate talks begin, we already know that 2015 has been the warmest on record, with the 5-year-period to 2015 also recording the warmest global average temperatures ever, and with 14 of the warmest years in the last 100 all occurring in the 21st century. No surprise then that everyone – from Pope Francis to Prince Charles, from David Attenborough to David Bowie, and from Bjork to the head of the Royal Opera House – has been lining up to impress upon our world leaders that they must produce a deal which is ‘ambitious’ and ‘inspiring’. (The EU added that it must be ‘robust’ while the US, the world’s second worst producer of CO2, is more worried that it might also be ‘legally binding’. )

The Church Times reported last week that ‘disasters related to weather have occurred almost every day for the past decade, killing 606,000 people and leaving 4.1 billion injured, homeless, or in need of emergency aid’, as reported by the United Nations. The article went on:

‘The frequency of such disasters has almost doubled since the mid-1990s.’

It included a world map graphically coloured so that regions from Alaska to India and the Philippines are seen to have suffered the most. As the 21st UN Conference on Climate Change (or COP21 as it is called) began in Paris on Monday the BBC reported from Micronesia in the Pacific that some of their islands may become uninhabitable or simply disappear as sea levels rise.

Even in the UK we have seen extremes of weather, but few here have been driven from their land and become ‘environment refugees’, as has happened in Syria, sub-Saharan Africa and (with less immediate implications for Europe) Central America. Where some see cyclones and flooding, others suffer drought and sandstorms. It is hard to judge just how much of this extreme weather is due to climate change, but the evidence is that the upward trend will continue. As Christians we should probably be concerned that most of the deaths from storms (40% of the total) occur in lower-income countries. In Europe we are more likely to suffer from heatwaves.

Prince Charles points out (if he weren’t so serious he might be thought smug) that people have been drawing attention to such trends for years and all we are seeing now is their vindication.   Alluding poignantly to ‘displaced people’ in Syria, he told Sky News:

“Some of us were saying 20 something years ago that if we didn’t tackle these issues you would see ever greater conflict over scarce resources and ever greater difficulties over drought, and the accumulating effect of climate change, which means that people have to move…”

The 2˚C limit to global warming quoted as being the ultimate ambition of this conference dates from the agreement by climate negotiators in Cancun in 2010 to hold the increase in global average temperatures below 2°C above pre-industrial levels. On current policies the increase could be as much as 3.6° by 2100. And why 2°C? A very useful set of graphics on the BBC News website (under Science and Environment) illustrates these numbers and trends and states: ‘Scientists have determined that if temperature rises surpass 2°C, this will lead to substantial and dangerous climate impacts, which will hit the world’s poor in particular.’

In practical terms, everyone brings their own approach to the table. Thus the EU’s representative has asked all countries to peak their emissions by 2020 in line with the UN climate science panel’s report . He also recognised that developing countries will need extra help since they still have to go through the stages of growth where we, in the past, relied heavily on fossil fuels. The EU recognised, he said, ‘the issue of transferring funds from developed to developing countries’ and added: ‘Public finance alone will not be enough to meet the challenge and we also need to attract better private climate finance.”

There are major obstacles to overcome but we should rejoice that 150 world leaders have come together and that, for the first time, both rich and poor countries are represented. Many see a greater chance of success in Paris than at previous such conferences, not least because there is now much more of a sense of a universal will and with the mounting evidence for global warming even since Copenhagen in 2009.

Renewable technologies have moved forward much faster than we might have imagined. The cost of wind power and solar in many countries is now roughly the same as coal or gas. Economics dictates that as relative prices change incentives will be created to develop better sources of energy, and there are lots of exciting innovations in the offing (such as printable solar panels and floating wind turbines) as well as ever more research into greater energy efficiency.   Campaigns and UN conferences have made us all more aware of energy and climate: not just saving the planet but saving money and even saving lives.

So what can we do in West Oxfordshire to make a difference? The new buzz phrase is ‘citizen pressure’ and our leaders may need much more of that from those of us who are concerned for our neighbour. The selfish motives for caring about climate change are growing every day but as Christians we should no doubt care as much about our fellow citizens in vulnerable parts of the world as we do about our grandchildren.

This will require long-term changes in outlook and behaviour, but it has to start now as we all seek to move away from reliance on fossil fuels and towards low carbon economies. There are campaigns to ‘leave the stuff in the ground’ and marches and demonstrations. And there are simple steps we can adopt ourselves to limit our own daily ‘carbon footprint’ and make others aware of the dangers of a lifestyle characterised by waste and excess.

Then there is the movement to ‘fast for the climate’ on the first day of each month, whose website also has guidelines on fasting (http://fastfortheclimate.org/en/) or the religious version (http://www.prayandfastfortheclimate.org.uk/) with its current focus on praying for the Paris talks (http://pray4cop21.org/).

There is also an Advent calendar with daily short messages (audio or transcript): http://advent.arocha.org.uk/. Thanks to online resources such as these you will never be alone in expressing your care for the world and your neighbour. A Pray4COP21 prayer is contributed each day by different organisations. A Rocha UK happened to provide the one today (December 1st):

Dear Lord,
We see sea levels rising in low Pacific Island Nations,
plants and animals becoming extinct, birds changing their
migration patterns and the flowering time of plants advancing.
We also see that it is the poor who are suffering the most
from the way that the rich world is changing the climate
through overuse of fossil fuels and deforestation.
But today we have hope.
The preparatory meetings for the Paris negotiations
have gone further than any past meetings.
There is hope that a binding climate change
treaty can be drafted in Paris.
We pray in hope for a positive result.
We ask this in Jesus’ name.  Amen

Mark is currently on sick leave. Ilona is covering for Mark during this period. Her normal rest day is Monday.